Thailand Toray Science Foundation (TTSF) has held 28th award and funding for science and technology research presentation ceremony on March 11, 2022 at Bangkok Marriott The Surawong Hotel. This year, the event remains under control measures to prevent the spread of COVID-19 strictly.

Due to the COVID-19 situation, Mr. Akihiro Nikkaku, Chairman of Toray Industries Inc. (Japan) was unable to attend the ceremony, so he sent a video message to congratulate the winners. He also mentioned about the business operations of the Toray Group throughout the period of 59 years in Thailand. Toray Group expands business continuously including businesses aimed at tackling global warming which brings a terrible natural disaster. As a result, the world is accelerating the creation of a sustainable society. Thailand itself has announced its “BCG Policy” (Bio-Circular-Green) aimed at enhancing industry and protecting the environment and a “national energy plan” that seriously promotes carrying on carbon neutrality as well as promotes the expansion of EV (Electric Vehicle) production even more. Toray Group also intends to expand its business and develop technology in a growing segment, including “Green Innovation Business” and “Life Innovation” to seize the opportunity to contribute to society, such as building carbon neutrality with Thai people. When classifying today’s projects that receive science and technology awards and research grants in accordance with that mentioned view, there are 8 research projects on Medical and Biotechnology, 8 research projects on Material Technology,4 research projects on Environmental Technology & Engineering and 2 research projects on Basic Science which all projects are R&D operations in line with target of Thailand.

With the TTSF’s intention to promote and support science and technology research for Thailand’s development and progress, TTSF has arranged 3 types of awards as follows:

Science and Technology Award for individuals or institutions with outstanding contributions in science and technology. This year, individual winner is Prof. Dr. Suchinda Malaivijitnond from Chulalongkorn University, while the winner of the institution category is Electrochemistry and Optical Spectroscopy Center of Excellence, Chulalongkorn University, 2 awards totaling 800,000 Baht

Science and Technology Research Grants To support researchers who are researching or having research projects that are the foundations benefiting the science and technology field in Thailand. This year, 20 research grants have been awarded, totally 4 million Baht, dividing into 7 projects in agriculture, 7 projects in chemistry, 2 projects in physics and 4 projects in engineering.

This year, TTSF contributes awards and funding of 5.45 million Baht. During its 28 years of operation, TTSF has awarded 57 Science and Technology Awards, 508 research grants and 243 science teachers awards, totally more than 145 million Baht.

Award winning representative, Prof. Dr. Suchinda Malaivijitnond conveys her appreciation and thanks to TTSF for its continued focus on Thailand’s science and technology research personnel for over 28 years. Such awards and research grants not only encourage those who work in scientific and technological research, but also inspiring to give research personnel the force to continue their work. This award and research funding is another important cog for the country to create researcher from upstream: students in schools to researchers at universities and research institutions. At the moment, award-winning research personnel and research funding from TTSF are distributed throughout all regions of Thailand. Science and technology research is also an important mechanism for us to fight and adapt to changes of the world, as can be seen in developed countries that support strong research and use research as a base for their development. One example of the role of research used as a combat for human survival is the use of scientific and technological knowledge in production of drug, vaccine and various innovations to fight with an occurred and a pandemic of COVID-19. It is as the statement of TTSF of “Research is the key to success”.

Finally, H.E. General Surayud Chulanont, the President of the Privy Council, praised TTSF’s activities for supporting and promoting Thailand’s advances in science and technology. He also blessed TTSF and those who contributed to the TTSF’s activities, Board of Directors of TTSF as well as award and funding recipients for prosperity and happiness. Before closing of the ceremony, as a commemorating, H.E. General Surayud took a photo with the winners. 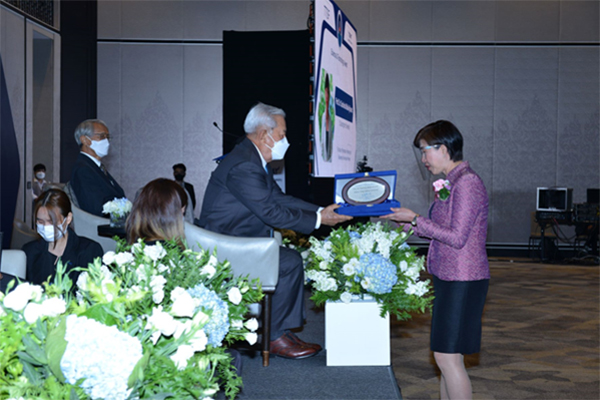 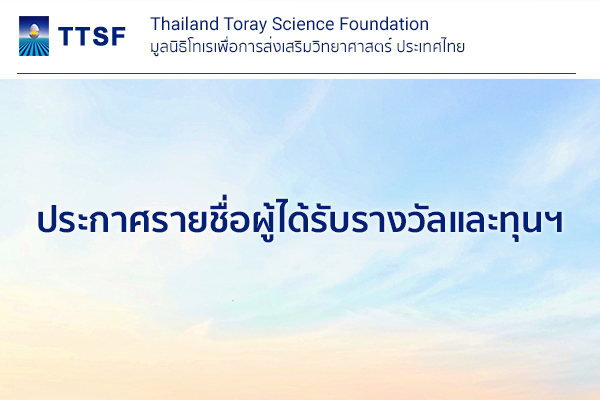 Announcement : Winners for the 28th Awards and Grants 2021 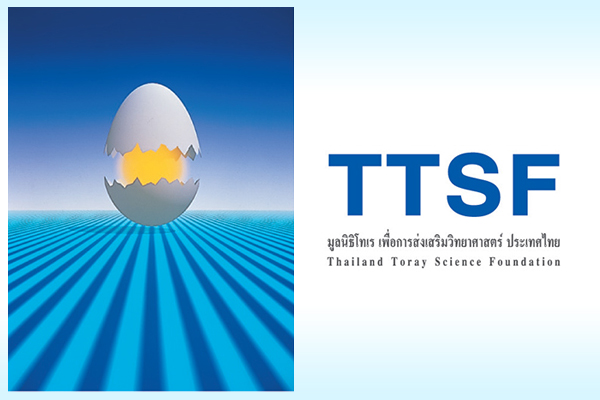